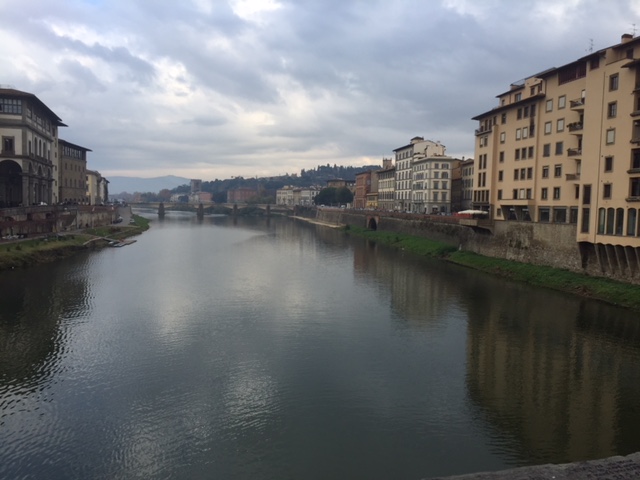 April 25th  is a holiday in Italy celebrating the liberation of the country from Fascism and Nazism.  One April 25th, a thousand years ago, an earlier version of myself at nineteen turned a corner in Florence and ran head-long into a parade marching toward me, with what my memory tells me held at least a thousand people most carrying Italian flags.  I was immediately caught up in the parade, mentioned that I was an American when asked, and was instantly embraced by those around me.  They gave me a wonderful dinner and too much wine, thanking me many times over, despite my protests that it was not I who deserved their thanks but my father and my uncle and the millions others who died.  They ignored my protests and offered me more wine.

I’ve been in love with Florence ever since.

I mention that day because I received an email this April 25th from Claudia Pelecca reminding me of the holiday.  Claudia and his family run a wonderful winery in Ficulle, Italy called Tenuta Vitalonga.  Ficulle is just north of Orvieto.

Jacquelyn and I are tourists, an admission I don’t hesitate to make.  We planned to fly into Rome, sightsee briefly in Orvieto, stop at Claudia Pelecca’s winery for lunch, and then continue onto Florence.  These stops were arranged by Guilia Chapman.  In addition to knowing all there is to know about Rome, Guilia is one of the most delightful women we’ve ever met.  In addition to arranging for our car, and the unheralded stops on our way to Florence, she was also our expert guide to Rome, principally our guide to the Vatican and the Colosseo. We were picked up from the airport, admittedly a bit tired from the trip and settled into the back seat on our way to Orvieto. 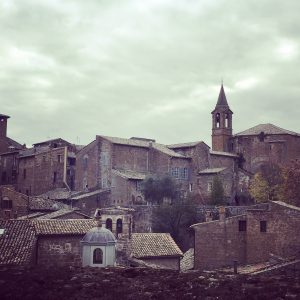 Orvieto is a small 13th century town situated on a flat summit of volcanic rock in Umbria, Italy.  The town rises majestically from its summit, massive defensive walls built from the same rock provide the town its perimeter.   Orvieto’s most famous landmark is the Duomo di Orvieto, begun in 1290 and finished in 1607.  Indeed, it can be said that the Duomo was not  actually finished until 1970 when the three bronze doors into the cathedral were installed.  As we arrived, the Duomo’s mosaic façade shone in the late afternoon sun.  The bas-relief on the piers reflects scenes from the Old to the New Testament, from the Book of Genesis to the Book of Revelation.  You could almost imagine the reaction of those in the 13th century, venturing into the Nave lest the bas-relief scions of the devil, which beckon from the Duomo’s façade, pulled them bodily into one of Dante’s nine circles of hell. 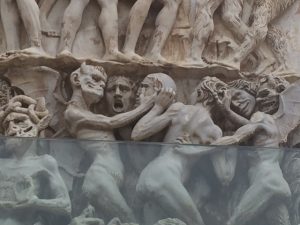 Thankfully divested from that gruesome fate by the intervening centuries, Jacquelyn and I had some coffee, enjoyed the people, shopped a bit (Jacquelyn bought a lovely, yellow, handmade Cuoieria bag), wandered a bit and soon headed north to Claudia’s winery, Tenuta Vitalonga.

Much to our surprise, we were the winery’s only clients that day and we were treated – unexpectedly – to a sumptuous five course meal with wine pairings.  The wine was delicious, the food superb and Claudia and his family went out of their way to make sure we were welcome both to their winery and their country.  We bought a case of their wine and Claudia arranged for it to be shipped to our home.  Without equivocation, Claudia, his family and his winery will be on our “go to” list for a long time.  Until we visit again, we will enjoy their wine.

Back in the car, we made our way to Florence.  And Jacquelyn’s assessment summed up our first day perfectly.

“We’re in Italy.  I bought a beautiful bag and a case of delicious wine.  How could our vacation start off any better.”

“And,” I offered, “we didn’t get pulled into Dante’s inferno by the devil.”

Everything in Florence seems old by centuries.  Our hotel, Hotel Spadai, however, housed a deceptively modern interior.  It’s central location, just a block from the Piazza del Duomo, was perfect.  The hotel’s staff was excellent and our stay was no less than lovely because of them.  Indeed, the people of Florence, every single person we met, without exception, were gracious, charming and incredibly helpful; from the guard at the entrance to the Campanile, which sits adjacent to the Duomo, to the Italian businessman we sat next to at lunch.  His knowledge of Dallas, we found, is confined to the Dallas Cowboys and Jerry Jones, which, in itself, speaks volumes.

The Duomo Santa Maria del Fiore, encircled by a multitude of shops and restaurants lining the periphery of the piazza, dominates both the square and the skyline of Florence.  Look at any picture of the city’s skyline and the Duomo will be there, it red dome and its golden ball will reach higher than the surrounding rooftops.  While the Duomo was consecrated in 1059, construction on the Duomo was not begun until 1296 and was not completed until 1436 when the  magnificent dome, its commission won by Filippo Brunelleschi, was finished.  The 18 ton golden ball that sits atop the dome was manufactured by Andrea del Verrocchio in 1468 and stood atop the dome until 1601 when lightning struck and the ball toppled to the ground.  The place it landed was marked with a marble slab, which is still in place today.  The ball was replaced and for 400 years it has stood the ravages of time.  Interestingly, the Duomo’s neo-Gothic façade was the subject of intense debate for centuries after the Duomo’s construction was finished, and the façade was not completed until 1887, eight hundred years after its consecration.  Living in Dallas, Jacquelyn and I were struck by the wholly different constructions of time we have grown up with and that which the Italians have experienced. 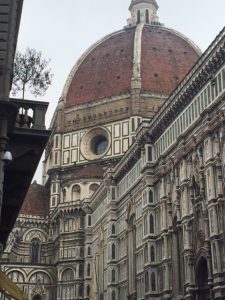 While in retrospect I now have to admit to a little bit of church overload, each Florentine church more magnificent than the last, stepping inside the Duomo is nothing short of astounding.  The mosaic of the Last Judgment which sits at the apex of the Duomo’s octagonal interior is particularly striking.  Like the Duomo itself, the mosaics, begun by Vasari and completed by Zuccari and which depict the medieval representation of hell (there’s a lot of that in Florence), were begun in 1226 but were not completed until the 14th century.  And while remarkably old (Dante himself was christened in the Duomo), taking the stairs to the Duomo’s lower levels leads you down to a Florence underneath the Duomo as it existed in Roman times, more than two thousand years before.

Coming back out onto the piazza, we marveled at the three sets of gilded bronze doors on the Duomo.  The South Door was crafted by Andrea Pisano in 1330, while Lorenzo Ghilberti won the commission for the North Door.  But it is the East Door, also a Ghilberti creation and which Michelangelo christened the Gates of Paradise, which is the most famous.  It is comprised of ten separate panels, each with a representation of but one scene from the Old Testament. 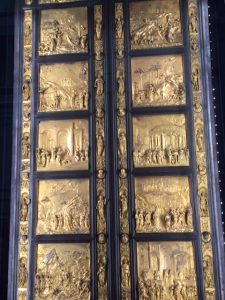 Tourists that we are, we celebrated the Duomo with some gelato on the piazza. 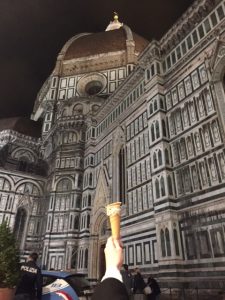 We took in the tourist spots of course but the skill and majesty of the creations that surround you in Florence cannot be overstated.  In the Museo dell-Opera del Duomo is Michelangelo’s Pieta, not to be confused with the Pieta which is housed in the Basilica St. Peter in Rome.  We walked through the Uffizi Palace, its corridors reminding us later of the sumptuous corridors of the Vatican. 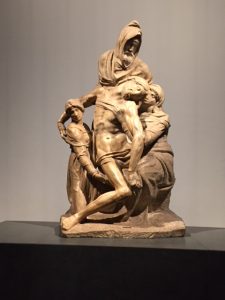 We walked the Ponte Vecchio over the Arno River, learning in the process that this route over the Arno has been utilized since Etruscan times.  The Ponte Vecchio is now, for better or worse, lined with shops, some lovely, some less so, selling everything gold or diamond-encrusted. Just off the Ponte Vecchio is Paolo Pappini & Company, a small, but infamous leather goods shop, known largely for sending handmade leather boxes to every president since Franklin Delano Roosevelt. The daughter and granddaughter of the founder were wonderfully attentive and as knowledgeable as their forebears.  We simply had to make a purchase.

The Palazzo Vecchio, possibly Florence’s most famous landmark, rises from the narrow streets, next to which is the Uffizi Palace.  Built between 1560 and 1570 in the Renaissance style, the third floor of the Uffizi, the Galleria Degli Uffzi, houses what may be one of the greatest art collections in the world. 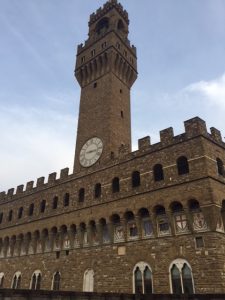 Our trip to Florence, five days and four nights, was taken in late November.  We had squid for our Thanksgiving meal at Lo Osteria Personale, a tradition we may try to replicate, though without the city streets of Florence for a backdrop, I doubt it will be the same.  Florence was just beginning the process of decorating for the Christmas holidays and gigantic glowing stars and massive lit wreaths were being hung over the narrow city streets.  Whole buildings were clothed in lights and the streets were crowded with walkers, the shops crowded with buyers.  We decided just then that Christmas in Florence had to be on our list. 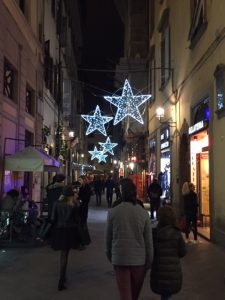 We walked where we wanted, stopping when we spied something grand.  Our stops invariably were longer than our walks.  We had dinner one night at Osteria dell’Enteca.  The beautifully appointed restaurant is cloaked in dark woods punctuated with spears of light on limestone walls.  We were delightedly escorted to their wine area where we were asked to pick our evening’s wine.  We purposely hesitated over our choice, enjoying the descriptions of each wine we provisionally selected from the very knowledgeable sommelier.

We accepted the recommendation of a blog called “Girl in Florence” and stopped for a glass of wine at a tiny wine bar called Le Volpi e L’Uva.  We were surrounded by locals and were treated as they were treated, with a warm smile and remarkable efficiency.  We will be back. 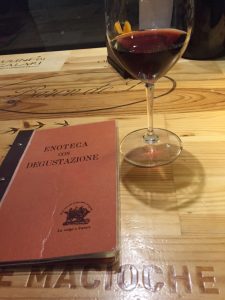 We had breakfast in the hotel the next morning as we did each morning, then said our goodbyes to this lovely city, and walked to the station, bags in hand, a steady rain punctuating our departure.

Florence is wonderful but I will share just one complaint.  There is just too much to Florence.  There is too much to see.  Too much to do.  And I suppose we had too little time in which to do it all.  Although we missed this year’s April 25th parade, we will, of course, be back.  So while I’ve left out from this post most of our Florence excursion, if you’ve gotten this far, I bet you’d rather have your own excursion than to read about ours.  I urge you to go and visit for yourself.

We took the train to Rome, spending just a little more for first class seats, our tickets purchased from the ticket vendor at the station, a man in his fifties, who couldn’t have been nicer.

My next post will be about our trip to Rome, our wonderful guide, Guilia Chapman, and why Jacquelyn, even now, continues to look for employment there with the idea of making Rome our permanent home.