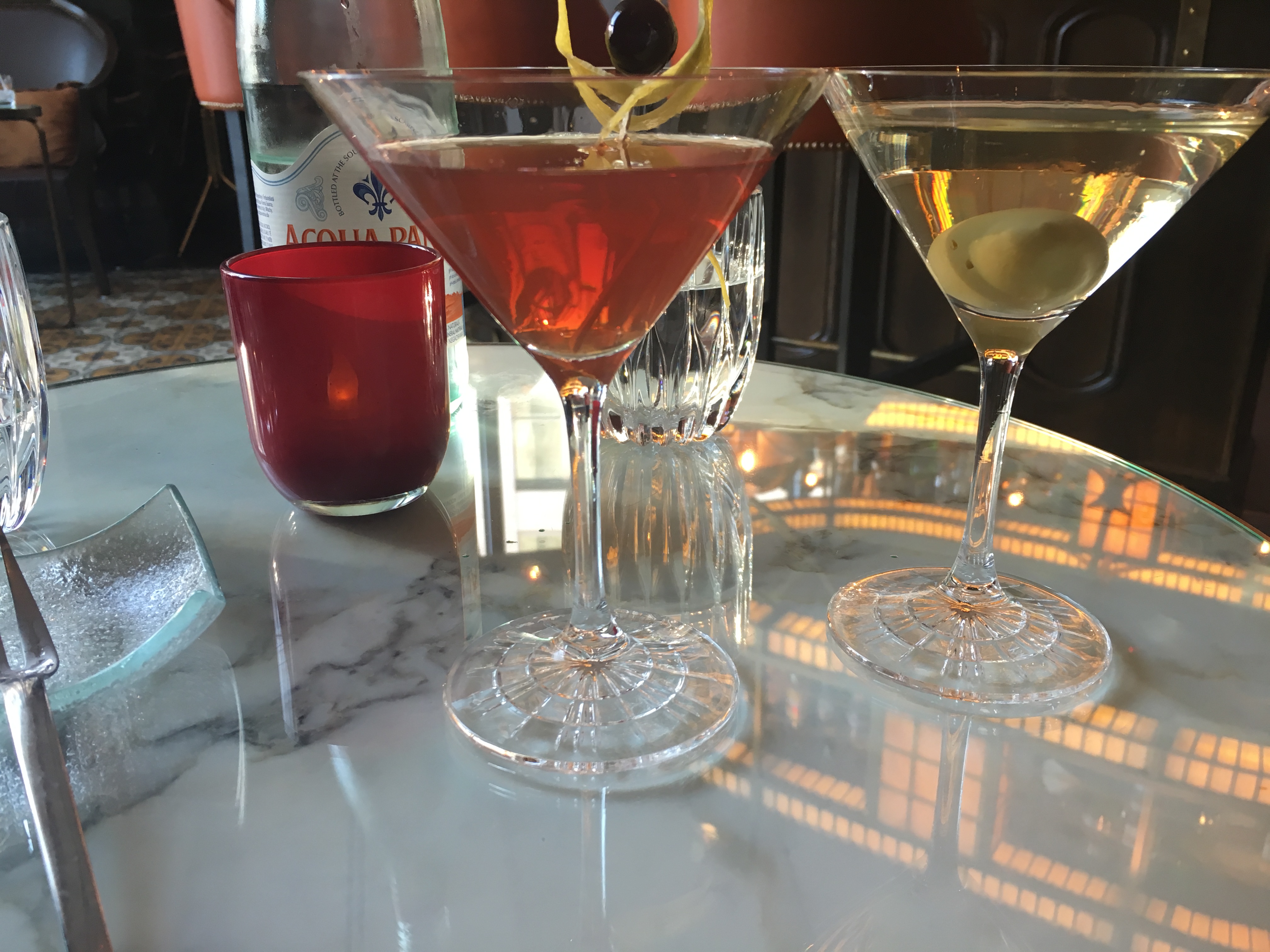 Continental Hotel Budapest: It was an average hotel that left something to be desired. The room was not a small room by European standards but the hotel crammed too much furniture into the too small space leaving little to no room for maneuvering for two people. We also had a problem with housekeeping not completing the room and not restocking essentials – such as soap. For us, it is the small details that matter and unfortunately, as a result, we will likely not return to this hotel.

Art Nouveau Palace Hotel (Prague): It was a great hotel. Despite Steve’s comments regarding the Viking cruisers, we would return. The décor was lovely and reflective of the art nouveau style. The room was larger than expected for an entry level room with plenty of room for two people. The bathroom was completely marble with some space for all of our toiletry items. The service was friendly and helpful – both pre-trip and during our stay. The hotel concierge was very receptive and responsive via email on arranging transportation and our tour prior to our arrival. And the location is very central so you can easily get around Prague.

Rezkakas Bistro (Budapest): This was a last minute reservation by our hotel. Admittedly, we were exhausted. We had flown in that morning, completed our fabulous four hour walking tour and just wanted to sit and relax. And this restaurant did not disappoint. They accommodated our request to sit outside, they let us peruse the wine and food menu and assisted with any decisions. They gave us a wonderful wine recommendation and the food was wonderful.  This is where I decided it was time to remember my Hungarian grandmother and my memories of growing up with her beef goulash.  The restaurant’s version did not disappoint.

Arany Kaviar (Budapest): We chose this restaurant based on reviews and our curiosity. We usually have one very upscale dinner when we are on vacation. And this was my choice (with Steve’s input) for this trip. It is a small restaurant with Russian influences and it piqued my interest. They have two set menus – Hungarian and Russian. And after hearing so much about the Russian influence, we chose the Russian menu and I was suddenly into my first foray with caviar. The restaurant setting was very tranquil in a unique setting. The restaurant is set below ground level such that the tables are open to a lovely outdoor area. There were only about six tables so the noise level was very quiet. The service was impeccable. The food was interesting and very good. But we’re not convinced the price was worth the food. 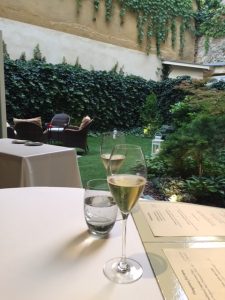 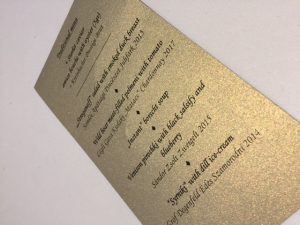 Urban Betyar (Budapest): Our last night in Budapest, we took the recommendation from our lovely tour guide on one of her favorite restaurants. Again we sat outside. We should mention when we traveled in July the highs were in the low 80s and the lows were in the high 60s. Wonderful. This is also where we observed French fans touting their victory in the middle of the street with flags, face paint and the French national anthem. Here is where I wished we knew at least the word for “martini” in Hungarian. But thankfully the restaurant had a wonderful drink and wine list, good food and service. For our last night, it was time for chicken paprikash to end our trip to Hungary. And I loved it. A very nice meal to end the first half of our trip. 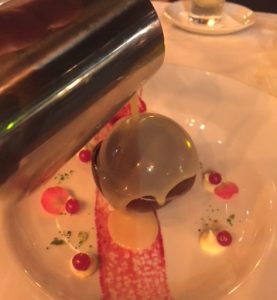 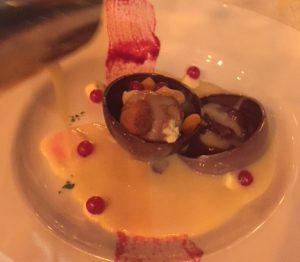 Szamos Café (Budapest): We stopped here for breakfast on our third day in Budapest because we were hungry and it was close to our next destination right across the plaza – the Hungarian Parliament. We will go back again and again. The coffee was fabulous with even better designs in the foam. And Steve had a delightful dessert for breakfast. I stuck with the Panini though I did steal more than one bite of his dessert. Highly recommend a visit here. And the view from their outdoor area left nothing to be desired. 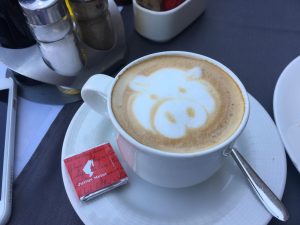 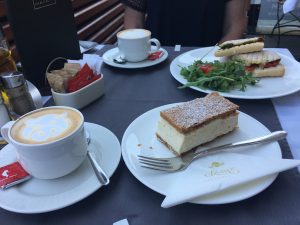 Hergetova Cihelna (Prague): Best view of the Charles Bridge. No doubt. We chose this restaurant right on the Vltava River due to its good reviews and the view of Prague. Although we arrived very early for our reservations, the restaurant had no issues seating us immediately with the added bonus of a table on their terrace overlooking the Charles Bridge. With heaters, blankets and accommodations galore, the terrace was breezy, cool and very quiet.

Pizza Coloseum (Prague): This was a last minute decision when we could not decide if we were really hungry or not given all of the food we had eaten on the Taste of Prague food tour. So we settled on an outdoor café on our walk back to our hotel for a salad. We were pleasantly surprised. We shared a salad of black lentil, goat cheese, cantaloupe and other spices that was absolutely delicious. They did not mind that we were not looking to have a full meal and were more than welcoming in their service.

Café Lounge (Prague): Thank you to Taste of Prague. One of the bonuses of the Taste of Prague food tour is their book which they gave us upon completing our tour. It has recommendations for every foodie and teh Café Loounge was one of their recommendations. It exceed expectations. We were given a table by an open floor to ceiling window where we could look out over their outdoor seating area but we were still inside. The wine list introduced us to a wine we are still trying to locate in the United States – Stapleton & Springer – named for its winemaker and his investor. We may have chosen it purely because it was a Czech wine with a name we recognized – never mind that recognition is only Steve’s last name! Regardless of how we chose it, it was a fabulous red wine.  The food was amazing, including my adventure with trying rabbit for the first time. And the dessert lived up to our other experiences in Prague. Wonderful end to the meal. 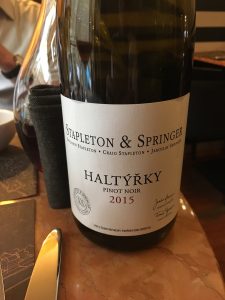 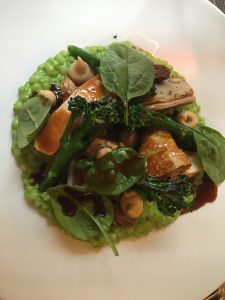 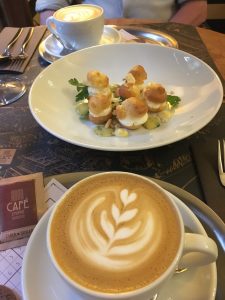 Four Seasons Hotel Gresham Palace Bar (Budapest): We arrived in Budapest on Steve’s pseudo birthday. His birthday was really the day we left but since we arrived the next day due to the time change, I deemed the next day his birthday as well. This meant drinks to toast his day. The Four Seasons Hotel in Budapest is the former Gresham Palace restored to absolute glorious proportions. It was originally built by the Gresham Company in 1907 but due to the unfortunate history in Hungary the hotel required extensive restoration which was completed by 2004. It has original ironwork gates which are impressive and daunting when you enter. The Four Seasons maintained the reputation of solid martinis and manhattans (our drinks of choice) experienced at other locations. 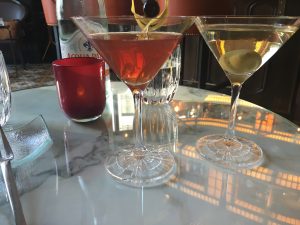 Hemingway Bar (Prague): Shout out again to Taste of Prague. You would miss this bar if you were not looking for it. The Bar only permits seating only with no standing room. The Bar has rules. The Bar takes reservations (as we learned) but luckily we went early and were able to get two seats. The Bar has amazing service and even better drinks. The Bar was so good, Steve wanted to stay longer than two drinks and return after our dinner reservations. Unfortunately, such grandiose plans do not always come to fruition. But if you were to ask Steve, he would probably return to Prague just to visit Hemingway Bar and Café Savoy and I have to say, I would be in full agreement. 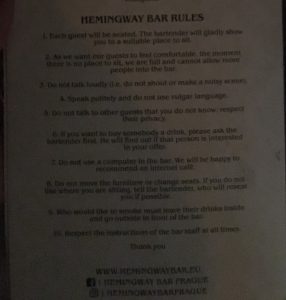 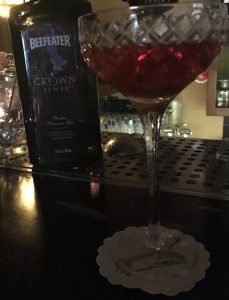